As 2018 dawned, Facebook announced its biggest ever change to its news feed algorithm. CEO Mark Zuckerberg asserts these changes would benefit “people’s well-being” by moving away from feeding users “relevant content” and towards “meaningful social interactions.” As a paying advertiser, you must shift to hit this moving target, and understand the new environment.

Tech strategy analyst Ben Thompson of Stratechery called into question the motivation for this change saying, “I’m just not entirely convinced that Zuckerberg and Mosseri [VP of News Feed for Facebook] are telling us the entire story.” Facebook changes for users may intend to enhance quality of life but Thompson calls this a “Strategy Credit” because doing the right thing isn’t costing Facebook any profit.

By flexing its pricing power, Facebook is raking in more per advertiser while delivering fewer ads and impressions, so its bottom line stays solid. Motives aside, the algorithm change is a harsh reality, but your business can survive and thrive despite Facebook management tilting the playing field so long as you understand how to effectively evolve your social media marketing plan. 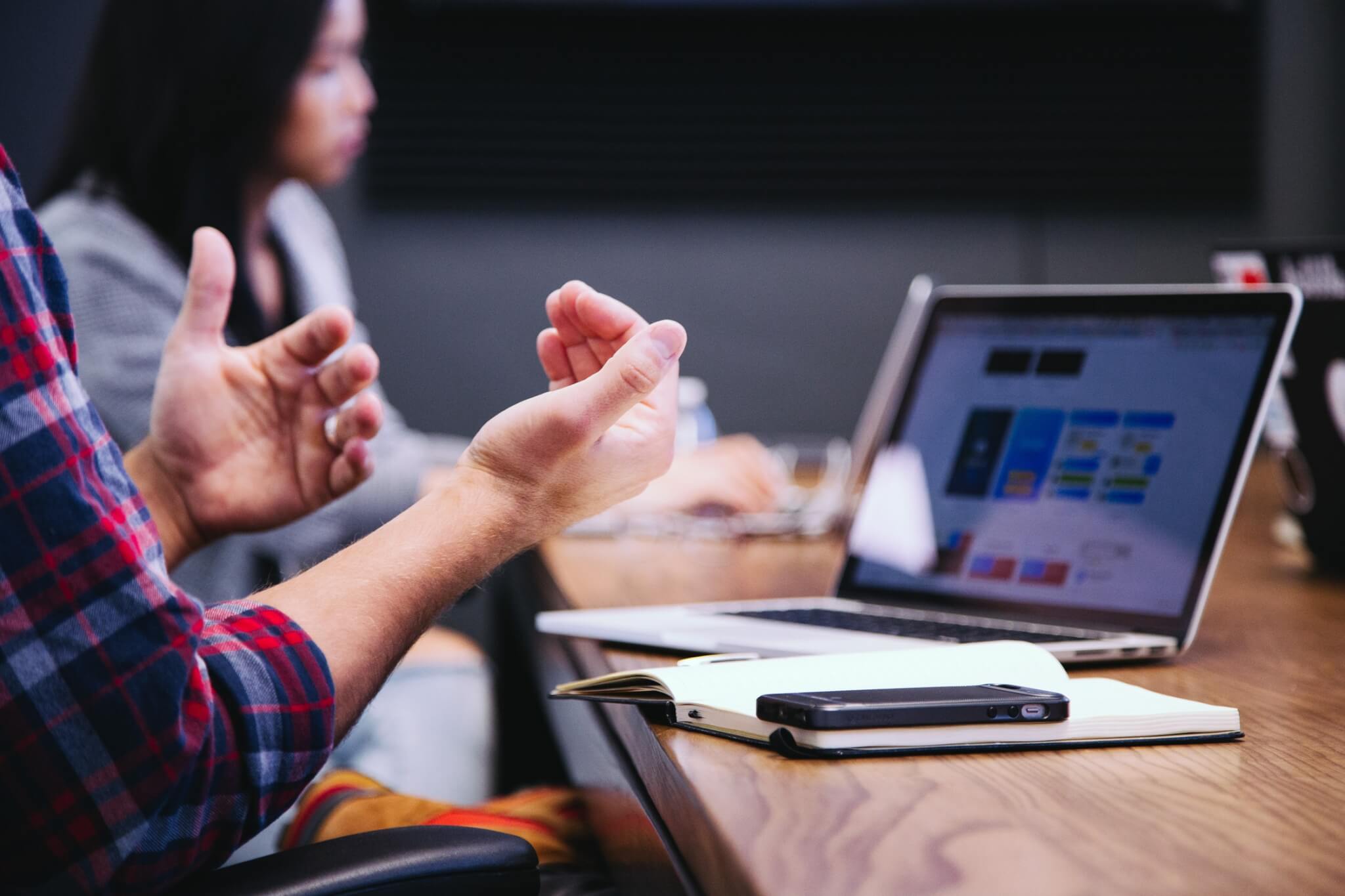 The Death of Organic Posts

If your business relied in the past on organic posts, i.e., those you don’t pay to promote, you’ll see the reach from these effectively die, according to the Wall Street Journal. In essence, Facebook is making it so that you can’t promote yourself on the social platform without paying them to do so. If you have a Facebook page where you post engaging content expecting page followers to see it in their feed, that will no longer work. That content might be relevant but is now sidelined since it’s from a business. 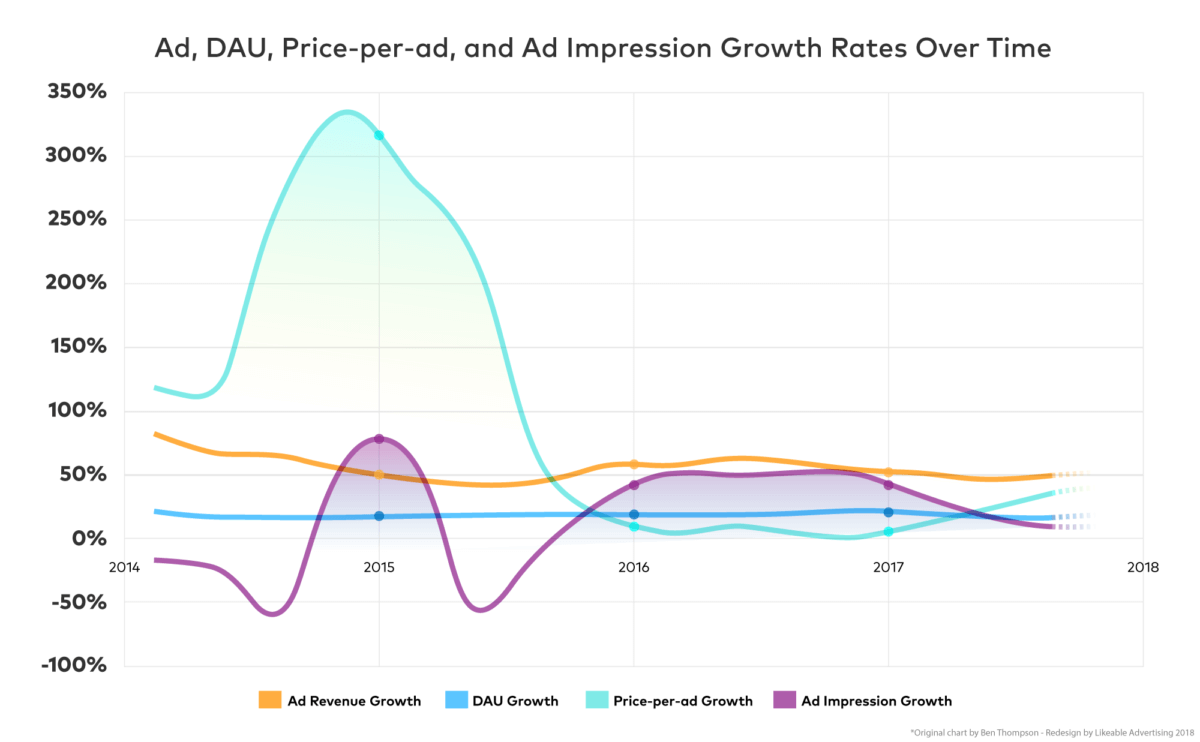 DAU Down, Dollars to Advertise Up

The math on this algorithm is clear and underscores Facebook pricing power. In announcing this change, Zuckerberg acknowledged that users would spend less time on Facebook. For the first time, its DAU (Daily Active Users) dropped between Q3 and Q4 2017, according to data from TechCrunch. Complicating those statistics is the fact that the FB ad buying environment is more competitive than ever while Facebook ad prices at auction are increasing drastically, yet effectiveness of ads is stagnant.

In the first half of 2017 alone, Facebook CPMs (cost for a thousand ad views) rocketed more than 170% from $4.12 in January up to $11.17 in June. If you purchase on a Cost Per Click basis instead, you saw a +135% jump in Facebook pricing from $.42 per click up to $.99 per click in the same six-month period. Meanwhile, Click-Through Rates (CTR) remained flat as did ad impressions leading to the inevitable conclusion that companies are getting the same (or less) bang for their ad buck.

Facebook is an increasingly competitive ad market. More advertisers are latching onto Facebook and are spending more money there than ever. The quantity of advertisers is up more than 25% year over year and ad spends by more than 120% while the ad load is growing at a much smaller rate (which, in effect, is a diminishment). Ad growth last year was 19% versus 30-50% in prior years with more buyers in the marketplace, so the challenges are self-evident.

Competing effectively in an arena of more players, greater Facebook costs, and an algorithm shift is problematic, but not unsolvable. It’s not enough anymore to get your customers to talk to you on Facebook. Now you must get them to talk with each other, preferably about you, your products, and services. Creating valuable content is critical to get the same or better results from your social ad spend. Because ad reach is more limited, you must advertise more effectively to achieve meaningful results.

Testing and Re-Engaging Are Critical

In addition to advertising on the news feed, the Watch video section is something to consider where you can sponsor a video or buy ad space within the video. Mid-Roll ads are available, and Pre-Roll ads are coming soon. There’s a shift such that Facebook users are now spending 50% more time in Watch video than in the news feed where browsing dropped to just 17 seconds. Testing ad effectiveness is crucial as is re-engaging your existing audience, but how do you take this from theory to tactics?

Working with an agency that understands the increasingly competitive Facebook advertising market is crucial. Tap an agency that is savvy to the algorithm change and shifting ad market rather than trying to run your campaign in-house and tinkering with trial and error. Testing is crucial, and agencies have the advantage of collating results across all their clients’ Facebook experience to capitalize on data, messaging, and promotions that they know will work to fine-tune and optimize your campaign.

With costs to advertise on Facebook rising and no signs of slowing, it’s time to invest in targeted management of your FB campaigns. When searching for a creative agency, look for a collaborator that leverages data tools such as affinity group targeting and all-inclusive management fees that incorporate multi-variant split and A/B testing for both ads and landing pages for best in class results.

Looking to make the most of your digital brand?

Get a free estimate by contacting us.

How Single Origin is Approaching Business During COVID-19 — Read More...